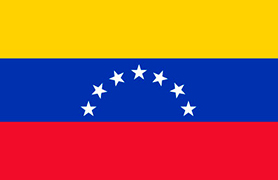 It is one of the business representations where the Directorate-General has placed its trust, even though its results are not as satisfactory as those of other representations. Everybody knows the reason for this, although in the future this country surely will open to the world and, similarly to other countries of Latin America, it will develop training plans in air transport.

There are many applications, but also many obstacles.

We trust in the future and the Venezuelan people.

Venezuela, officially known as the Bolivarian Republic of Venezuela, is an American country located in the northern part of South America, made up of a continental section and a large number of small islands and islets in the Caribbean Sea. Its capital and largest conurbation is the city of Caracas. It has an area of 916 445 sq. km. The mainland borders to the north with the Caribbean Sea and the Atlantic Ocean, to the west with Colombia, to the south with Brazil and to the east with Guyana. For this last country, the Venezuelan government holds a claim over an area of 159 542 sq. km within Guiana Essequibo. According to its maritime zones, it has sovereignty over 71 295 sq. km of territorial sea, 22 224 sq. km in its adjacent area, 9 471 507 sq. km of the Caribbean Sea and Atlantic Ocean under the concept of exclusive economic area, as well as 101 112 and 99 889 sq. km of the continental shelf. This maritime zone borders with those of 13 states.